I haven’t been boating since way back when I was a kid at day camp. So the idea of boating and the entire process has never really been on my radar. That is until one Saturday morning a few weeks ago when my boyfriend decided to purchase a Boston Whaler boat. We were on our way back from picking up our new toy when we quickly exited I-5 at exit 111 in Lacey, Washington. When I asked where we were going he explained that we had to stop by Cabela’s for some important boating items. I did the typical girlfriend nod of approval and didn’t think twice about it.

He was over in the boating section while I was looking at the aquarium. I saw my boyfriend wave to me from across the store so I quickly made my way over to him. He was talking with two customer service guys in front of a huge rack of life vests. As I approached he grabbed my hand and suggested that I try on a life vest.

A simple request that was not meant to harm, quickly became the equivalent of “Hey honey, all of us guys are going to stand here while you get naked, cover yourself in pudding and do jumping jacks in front of us.” Okay so even that thought makes me want to throw up, but that’s the exact feeling I had. A blanket of nausea fell over me and my legs went numb. I looked at the rack and looked back at the guys hoping they hadn’t heard what he said. My boyfriend nudged me along and said that they would be waiting for me.

Perfect! The pressure of squeezing my volume into a floatable corset was not my idea of a good time. I walked around the rack looking at the different sizes. I saw the 3X size and then the UNIVERSAL size. I grabbed both sizes in the same color and quickly ducked out of sight. I slowly pulled the 3X over my head and shoulders. I closed my eyes, took a deep breath in and pulled the strap in the front. I couldn’t believe it, but there was more than enough room for me to fit. I stood up and walked around like I was just voted “Miss Life Vest of America.” I unhooked that vest and grabbed the UNIVERSAL size. I pulled the vest over my head and felt the same amount of room as the first! I couldn’t believe it. I could fit and didn’t even need the spray-on Pam to help.

So I hung up the 3X and took the UNIVERSAL size over to the guys. It was one of those moments where I realized that working out and eating right was really paying off. If this were to have taken place five months ago, there is no way I could have fit in one of those vests.

I was on a personal high as we were walking out to the truck. Pulling out of the parking lot my boyfriend held my hand and smiled. I smiled back at him as he said, , “I’m glad we got everything we need. Next weekend we’re going boating!”

I woke up this morning and read an article on Good Morning America about two teenage girls who fulfilled a suicide pact because they had been bullied in school for being overweight and for having a specific hair color. Now, before I continue with this post, let me be very clear here… I don’t think bullying is acceptable, and I think kids and adults for that matter can be extremely mean. However, when are we going to stand up and say enough is enough? On both sides of this issue.

When I was in school we were allowed to ride bikes without helmets, walk to school and never worry about a possible shooting in the school cafeteria and yes, I hate to say it, but we would make fun of ourselves and our friends at school. Why? Because that’s what kids/people do…they make fun, they laugh and they are inappropriate.

Now over the past few years the term “bullying” is thrown around and made as an excuse for kids thinking its acceptable to blow up a school, kill themselves or kill others. My question is this… has bullying become yet another scapegoat for dealing with things that happen in life?

If I were to get pulled over by a cop and he gives me a ticket, is it okay to tell the cop or the Judge that he is bullying me because I’m fat? Is it okay for the clerk at the store to be mean to me because she is PMSing that week? NO! It’s not okay. But guess what? IT’S LIFE AND IT HAPPENS! People will be mean and they will write, say and do things that will hurt you. But instead of standing up for ourselves, or getting the help that we need from parents, professionals and officials, we ignore it and continue with this horrible trend of slapping a label on it to make it justifiable.

I am sad and angry that people chose to give up and end their life when they could have helped so many people. “Don’t label…do something!”

“Never be bullied into silence. Never allow yourself to be made a victim. Accept no one’s definition of your life, but define yourself.” – Harvey Fierstein.

Those were the words the man behind the Southwest Airlines ticket counter shouted to me as I was digging in my purse for my cell phone. I responded with, “Well thanks for stating the obvious, Steve!” He started to laugh and more importantly, I laughed. Steve waved his hands toward my bag and reassured those around us that he was not talking about me. You see in order for my bag to fly free (one of the very few airlines that allow that now) the maximum weight has to be 50 pounds or less, anything over that is a $50 fee.

Well, I was pushing 54 pounds and my good friend Steve was quick to let me know it. He asked if I wanted to pay the fee or remove some of the items. Before he could finish his sentence, my bag was unzipped and I was shoving things into my purse.

I watched as the numbers on the scale dropped and finally hit the magical “50” mark. Steve laughed and pointed at my purse. A pair of panties had gotten caught in the zipper and a pair of red shoes were sticking out of the pockets. He made some remark about having clean underware and I responded with utilizing duct tape around his “no no” place. That quickly shut him up and with that I was on my way to security.

As I was sitting at my gate I couldn’t help but think about my bag. How in just a matter of minutes I had to decide what should stay and what should go. When forced under pressure to decide the importance of things, it’s amazing what we decide to let go of, and even more important, the things that we feel we must hang on too.

I took out a pen and made a list of the things that I really needed to let go of. These are things that have been weighing me down and causing me to pay extra both physically, mentally, and emotionally. When was the last time you unzipped your bag and removed the few things that were weighing you down?

Who knew that traveling light could feel so good!? 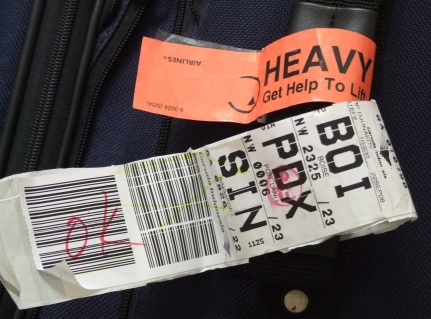 If you’re bored and looking for something to read… here are the Best Weight Loss Blogs via Cranky Fitness!

You’re probably asking yourself, what is a boxing speed bag? Well, here is a picture…

When flying I had a very specific system… I would walk down the aisle as fast as I could (with my thighs bouncing off the seats like a boxing speed bag) and find a seat toward the rear of the plane. As I would nestle in next to a window, I would grab the seatbelt and pull as hard as possible, hoping that my Hulk like skills would extend the fabric through the seat and I would hear that magical “click”.  I would hold my breath (which often smelled like a sandwich or Starbucks) and hoped that when the two pieces of metal would touch noses they would hook. When they didn’t connect, I would shove the seatbelt up under my shirt so no one would know that I wasn’t securely fastened.

I mention this because I recently watched a video that discussed vulnerability and how to “Lean into your discomfort”. I couldn’t help but to think about the discomfort I now feel as I am able to hook the seatbelt. For so long I had shoved the seatbelt under my clothes and I wouldn’t experience the discomfort. I guess it became the way I lived my life… I would just hide the parts that I didn’t want to face and hope that the people in my life, including myself, wouldn’t notice.

So now as I board each flight, I eagerly fasten my seatbelt and cherish the discomfort that I feel because that discomfort is proof that I am getting closer to my goal.